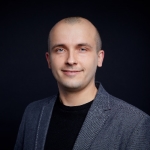 In 1961, Stanislaw Lem, the author of science-fiction novels, raised an interesting problem in one of his books - when the number of computers in the world exceeds the ability of people to control them, the correctness of their operation will have to be verified also by machines: computers will test computers.

Almost 60 years later, the phenomenon of the Internet of Things makes us, people, surrounded by computers: clouds of small machines hidden in clothes, everyday objects, buildings... How to effectively test such complex systems? Mr Lem's idea comes in handy: let's get other computers to work: we can use artificial intelligence - because it's no longer a science-fiction!

In my talk, I would like to present the idea of applying deep learning in the process of testing complex IoT systems. I want to explain a general idea and then I will show solutions and tools that allow for effective testing of the Internet of Things, like TensorFlow - an open source library available for everyone.